President of Indonesia, Joko Widodo announced that Indonesia would ban the export of Bauxite to other countries at the beginning of June 2023. It was announced in the meeting held on 21st Dec 2022. 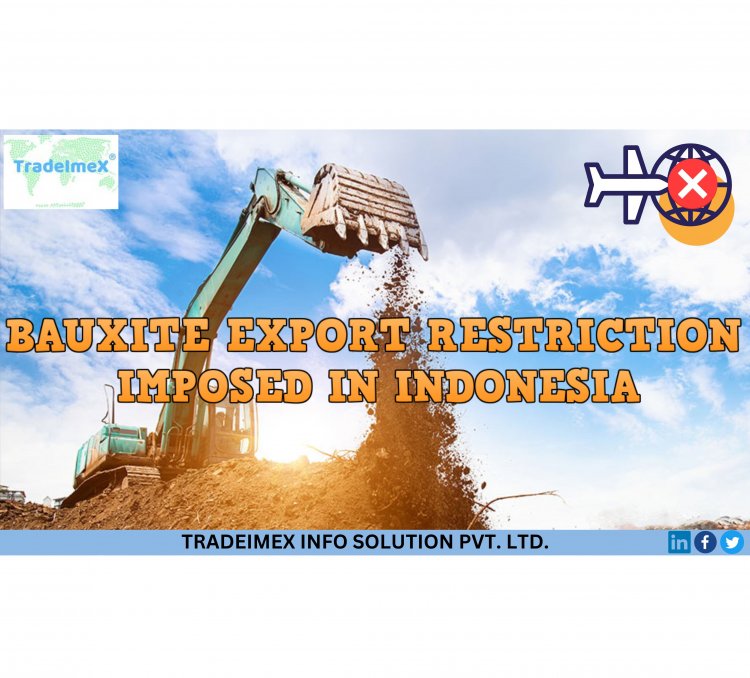 Let's grab the information & insights from the Infographic attached below.

In an official Press Conference held on 21st December 2022, the president of Indonesia, better known as Joko Widodo, officially declared that the nation would be implementing a complete bauxite ban in the country from the start of June 2023. This decision is taken by the president to expand its domestic production and processing of mineral resources within Indonesia.

As per the view of the President of Indonesia, the bauxite ban would lead to more domestic production of bauxite, a rise in job opportunities, growth in foreign exchange reserves, and more foreign investments in the bauxite manufacturing units.

The two major impacts of the Bauxite export ban on Indonesia are as follows:

This is the perceived impact or benefit that will happen for Indonesia due to the bauxite export ban. According to the official authorities, with the fulfillment of domestic demand, the foreign companies would also invest in the manufacturing units of Bauxite in Indonesia which would help generate profits and lead to the nation's economic growth.

Bauxite is also a crucial element that should be used in manufacturing electric vehicles. As we learned earlier in this blog, aluminum is extracted from Bauxite, and aluminum is used to build the body of vehicles and other lightweight components and parts of an EV. As per the rumors, electric vehicles would be sold at subsidized rates in Indonesia and would be used as the idle category of vehicles for government officials.

We hope you are finding our report interesting, and that it can add value to your knowledge. In the end, we would like to mention that it seems like the bauxite export ban won’t be the last ban implemented in Indonesia and in upcoming years, more such types of bans would come into effect concerning other raw materials such as copper, aluminum, etc.

We can say this with certainty because the president of Indonesia has also said that Indonesia is interested to sell at least semi-ready goods but not interested in selling raw materials like bauxite or copper ores.

Stay in touch with our blog page for more updates and information about recent ongoings and happenings in the international market. We deal in providing free samples and demos to our new customers so that they become accustomed to different functionalities and usage of each statistic mentioned in the database.

To Read more such amazing reports and blogs regularly, visit our page: https://www.tradeimex.in/blogs.

Establishment of Free Trade Agreement between India and the United Kin...

TradeImeX - A Solution of Your Trade

Mongolia Trade 2018 in a Glance

Coffee is Becoming a Popular Export Beverage Amongst Vietnamese Trade...