Crude Oil – A Major Import Product of India from Russia

Indian Crude Oil market is an ever-increasing market that tends to grow every year by a considerable amount. 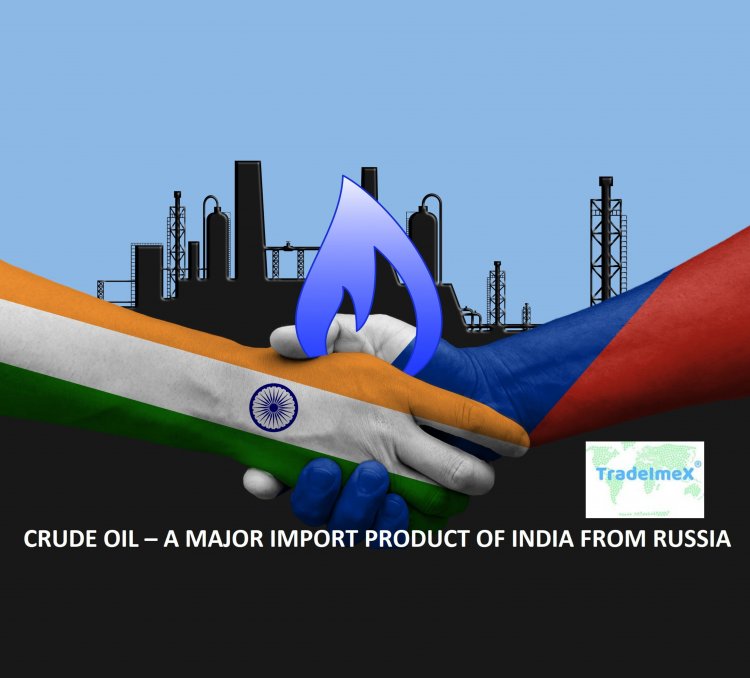 Indian Crude Oil market is an ever-increasing market that tends to grow every year by a considerable amount. This upward trend in the petroleum industry is observed because of the nation’s rapidly growing population due to which high volumes of crude oil are required to propel vehicles, produce adequate electricity supply, and for various other construction purposes.

As per India Import Export Data for the year 2021, the crude oil market share touched 21% as compared to total imports. Till the 2nd quarter of the year 2022, this import share has already grown and gone up to the all-time high of 25.62% share in total imports.

Till the Year 2021, India majorly imported crude oil from the following regions:

If the emphasis is given to the top countries from which India imported crude oil in the Year 2021, then TradeImeX has listed the top nations below: 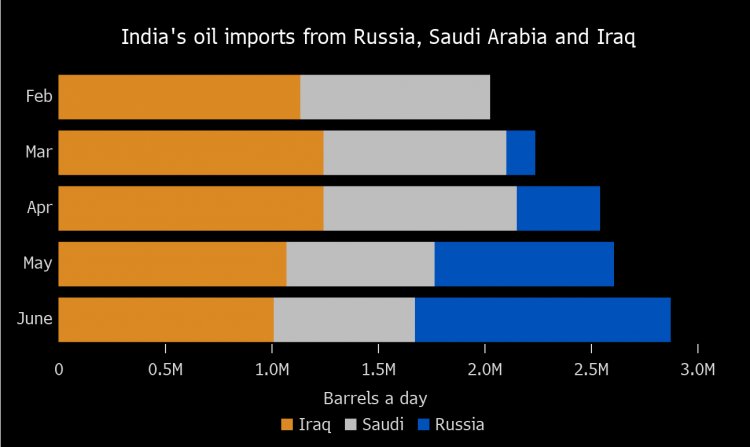 From the time the war between Russia and Ukraine started, the USA has levied various charges and penalties on Russia to restrict overseas trade with other nations which is hindering Russia Trade Data to a very great extent. The refiners from India performed in the opposite way and extracted Russian oil from the nation as much as possible.

The result of this trade is very astonishing. As per Russia Export Data statistics, the volumes of crude oil that were traded from Russia to India became very high which were close to 819,000 barrels per day in the month of May. Russia Trade Data for the month of April stated that this figure was 277,000 barrels per day. Due to this steep growth in total imports of crude oil from Russia to India, Russia hence becomes the 2nd biggest crude oil exporter to India in the year 2022.

External affairs minister of India, Minister S Jaishankar stated that India will continue to import crude oil from Russia as it is to the benefit of India because Russia is currently giving massive discounts on the prices of crude oil due to the ongoing war between Russia and Ukraine. This will not only help in fulfilling the gap between the supply and demand of crude oil in the nation but will also help in balancing the Import Export Data of the country too.

Russia Supplied 9,00,000+ barrels per day to India in the month of October, surpassing Saudi Arabia and Iraq.

WHAT INDIAN EXTERNAL AFFAIRS MINISTER SAYS IN THIS REGARD?

Honorable External Affairs Minister of India, S Jaishankar says that the deal of importing crude oil from Russia is proved to be a very beneficial deal so far as the cost per barrel that the nation is receiving is very less as compared to other nations. In the press conference, he openly mentioned that being a leader of a country whose per capita income is not more than $2000, it is his moral duty to provide the right resources to the citizens at cheaper prices.

It is clearly observed from this chart that India has shifted its interest towards Russia with regard to imports of crude oil in the year 2022.

FINAL CACHE TO THIS DISCUSSION

We would like to thank you if you have reached this point and enjoyed reading the blog up till now. Now it’s time to give a rest to this discussion by stating that indeed, the deal between India and Russia has proved to be successful and fruitful so far. The crude oil supply that we are getting is at a very low price compared to the supplies that we received earlier from Iraq, Saudi Arabia, and Iran. It’s not like that we are going to terminate our contracts with other nations, it’s just we will become less dependent on those nations for some years.

The fact that we should all agree upon is that Russia has extended help to India in various other fields of energy. India comprises of two major nuclear reactors that were set up by Russia and are in full flow in the Southern part of India. It is also said that six more similar types of reactors would be constructed in the nation soon.

Nonetheless, Russia has always supported India in various political issues too like issues related to Kashmir. Russia has proven to be an important source of the military for India.

After knowing all these facts, it is pretty much evident that the bond between India and Russia is very strong and both nations have helped each other in any situation. So, our verdict is that the deal of crude oil will also continue for a long and will prove to be fruitful as it is now.

To stay updated and aware of the overseas market analysis and trends, keep visiting our website: https://www.tradeimex.in/blogs.

For more information, connect with us over the mail at info@tradeimex.in or simply visit https://www.tradeimex.in/